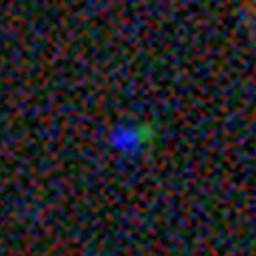 The professional telescopes on excellent locations see much further and deeper than what amateurs are ever capable of.

Some surveys are even automated to filter out anomalies in the background, scanning the sky for new (and potential hazardous) asteroids, comets, … Other surveys are used to map the sky in such detail that even the slightest movement or whisp of dust or gas can be detected.

That is, for example, why new comets are rarely named after their discoverer anymore, but carry the impersonal name of the survey that detected them first. (NEOWISE, ATLAS, PANSTARRS, LINEAR, …)

The amount of data gathered by these telescopes is mindblowing. Powerful computer programs are going through the data, comparing old data to new.

Most surveys only scan for certain parameters in their data, excluding other signs. Faint structures of light are not easy to detect in bits and bytes, and the human eye and mind still has the advantage of making sense of it. That is where amateur discoverers can take their chance. The data of the large surveys is usually released for public access. Amateurs can make use of it to prepare their observations, compare their recordings, and from time to time an amateur does notice something that wasn’t noticed by the supercomputers of the pros.

By going through the data, amateurs are still able to contribute to the science, and who knows, even discover something that was never seen by any human ever, before.

The category “discoveries” is used to document such objects that were found by me. All finds are reported to the appropriate “authority”, where they can be researched further, if needed. When a discovery turns out to be an anomaly, or does belong to a previously known object, the post will be updated. As long as a post stays unconfirmed, more observations are still needed. Posts marked as “confirmed”, are genuine new discoveries.

This work is licensed under a Creative Commons Attribution - Noncommercial 4.0 International License. Contact me at info @ aalstronomy.be

Manage Cookie Consent
To provide the best experiences, we use technologies like cookies to store and/or access device information. Consenting to these technologies will allow us to process data such as browsing behavior or unique IDs on this site. Not consenting or withdrawing consent, may adversely affect certain features and functions.
Beheer opties Beheer diensten Beheer leveranciers Lees meer over deze doeleinden
View preferences
{title} {title} {title}